A multidisciplinary artist who often engage in print, engraving, photography and textile processing. The works range from figurative to abstract and characterized by a dense carpet-textures in which flickering / assimilated various images. Black and white etchings, screen prints are larger and in color. The main subjects in her work ranges from personality to collective. She examining the affected body image in her daughter's portraits, identity and memory in images of her mother's jewelry, pour to the Israeli cypresses image textures and appropriates them. Recently investigating the image of the heart and examines the physical and symbolic dismantling. Print allows, working in layers and creating variations of the image. Metal engraving work is inherently connected to some of the issues as well as creating no .color bullets convey a sense of emptiness and the burning the memory 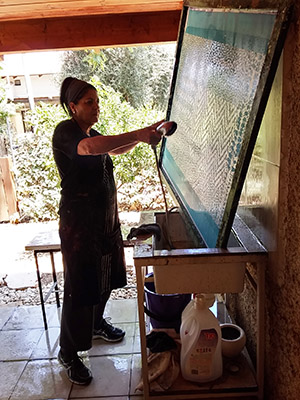 2007-" Portrait', The Gallery on the Cliff, Natanya. Curator:  Arik Shniider

Her art works are in private collections in Israel and abroad